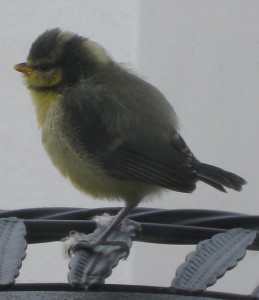 I was doing some coaching in my office when I looked out the window and sitting on the garden table was a wet fledgling blue tit. He must have just left the nest and landed on the table. He was calling to his mother and seemed to be in some distress. He was scared and the territory was unfamiliar to him. His mother tried to come to his aid but was nervous of being so close to the building and eventually she flew off. The little fledgling gave up calling and settled down to preening his feathers and practicing flapping his wings. After he had dried out and gained confidence practicing he gathered his courage, launched himself and flew to the nearest tree from where his mother had been calling to him. I was grateful to have been given this lovely display and it lead me to thinking how similar is the start of the journey for new life coaches.

Once they have been nurtured during the life coaching course they have all they need to succeed, all they have to do is take flight and launch themselves into the market place. Like the little fledgling sometimes the initial launching for the coach does not go exactly to plan as they find themselves in unfamiliar territory. A small few coaches, sadly, give up life coaching and being their own boss and ‘go back to the day job’.

Most fledgling coaches, like the blue tit, cry out for help and we are there like the mother bird, to provide the support they need to continue launching themselves with our mentors, our coaching online community and the coaching team. Like the fledgling the new coach will assess the territory and after some preening, re-launch the coaching practice and take off, just like my little fledgling blue tit. Go flying!